Giant Blue CGI Penises for EVERYONE! 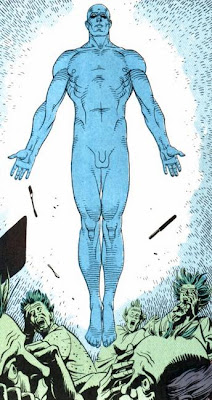 The overwhelming review that I've gotten from people who've seen the "Watchmen" is the following:

"It was an amazing movie. The ending was a bit weak. There was ALOT of full frontal blue glowing naked guy!"

After seeing the movie myself last week, I have to agree with the above review completely. I've included a picture of said blue glowing naked guy, Dr Manhattan, on the right. So, before seeing the movie though, I was wondering how many times you would see his junk. For the first 30 minutes of the movie they don't show it. Its always shots from the navel up or when he is standing full frontal, he has some weird black bikini bottoms on. I relaxed a bit. Then all of a sudden, he's lost the bottoms and its just out there! And he never gets the bottoms back. It's as if the movie producers said, "well now that we've crossed that barrier we don't have to go back." It wouldn't be so bad, except now every time Dr. Manhattan is the shot, I'm staring at it going, why is it being shown here? Does it add something to the scene? Why isn't he circumcised?

Ok so that's the way the character was portrayed in the graphic novel, so I'm willing to let that slide. But there were some amazingly attractive women in this movie and you barely see them naked. There is ONE boobie shot of the new Silk Specter, that's it, just one! Although it was good enough to make up from the scaring produced by CGI wang, the ratio of naked men to women in this movie is whack! Again, this wouldn't be a big deal, but who is the target audience of this comic book film? Girls with a fetish for glowing super human god like men? If Cosmopolitan puts out the article that says women need to hold out for their Dr. Manhattan's, us guys, we're all fucked.

That being said, it was an awesome movie. Most of the characters are bad ass and, although the movie is a bit slow, has a great story for the most part. Purists will complain that the ending is different and they missed some things, check out Wikipedia if you really must know.

By the way, I'm planning on making t-shirts that say "I'm hung like Dr. Manhattan" over the next week. That was really all I wanted to say in this post, but that would have been too short and I might have lost some of you. Now you know...