In Port Orchard, you get a gift basket!

This week capped off my most busy week of comedy to date (which isn't saying that much in relative terms). I did a show Thursday, two on Friday, two on Saturday, one on Sunday, and one on Wednesday. The best part about them though was that I got paid for all of them! I'm like a working comedian and stuff...

The last two gigs deserve highlighting though. The one on Sunday was for a reform Jewish meet-up at a temple in Bellevue. I did 20 minutes in front of a bunch of older Jewish people, and you know what, it went well. Now, I didn't go into my online dating stuff to the full extent, but they got the "mount it over my fireplace line" and were quoting it after the show. I also didn't do any of my drug jokes. Probably a good call. They also fed me some of the best deli I've had up here in Seattle so far.

The gig on Wednesday was in Port Orchard. That's like an 1:10 minute drive with no traffic. I got there way too early so I got to "hang out" in Port Orchard. This was spent watching the recap of the Cardinals-Eagles game where the Cardinals won and sent them to the Superbowl. Side note, I didn't know you could watch an entire football game in 30 minutes and its definitely the way to go if you don't actually care about watching it in real time. All the best plays, and Madden doesn't talk! Especially if there is no sound on! Ok, so the gig went well. It was a little rocky until I pointed out that people from Bremerton were dim witted, whereas then I was informed that the entirety of the audience was from Bremerton (which I expected) and so I got to profess my love for nuclear submarines as well. Everyone wins! I had them after that...

Best part about Port Orchard (or more specifically, the Slip 45 where the gig was at) was at the end they give you a gift basket (in addition to getting paid) as a thank you for coming out. Here is a picture of said gift basket: 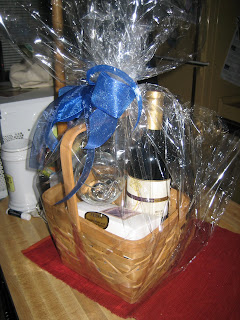 Pretty snazy huh!?! Yes, that's right kiddies, that's fudge in my freaking basket! I don't know why I'm using so many exclamation points today? Must be the weather. It's snowing again. I'm kind of done with it being cold here and it's so not over yet.

Anyways, time for me to write something brilliant. Catch you all soon!

This blog posting brought to you by the kick ass gift basket pictured above...